I was invited to the Swedishcrown princess Victoria’s birthday celebrations in July of 1998. The guy in charge, Kay Wieståhl, asked me if I could get in touch with my old musicians in Russia. He wanted as ymphony orchestra with guest performances. Wieståhl had seen one of the first tentative concert attempts a few years back.

I contacted the St. Petersburg Symphony Orchestra and got together a bigger ensemble, including well-known Swedish stars like Björn Skifs, Peter Harrysson and Jill Johnson. Maestro Anders Berglund conducted the orchestra, while Vicky von der Lancken was the co-producer.

After this concert, we were asked to do a few more while we were at it. They took place at the Svaneholm Castle in Scania in the very south of Sweden. I knew the castle hosts from before, and they were happy to hold the concerts. I was tipped by a friend about the Båstad Tennis Stadium and Dalhalla. We also booked the Tyresö Castle since we had performed some smaller concerts there in the past. In Gothenburg, we weren’t allowed to call the concert ”Rhapsody In Rock”, but had to rename it ”Summer Rhapsody”. The municipality felt that: ”the Rock word could scare people away.”!!!

We were on Swedish and American television, PBS, and then went straight into the studio. The CD this year received both a Gold and a Platinum Award. 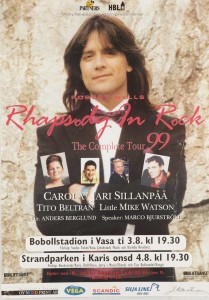