As preparations began for the summer of 1999, we wanted to expand the number of gigs and renew the set of performers. The ruins of Borgholm, Marstrand, and other arenas were added. Little Mike Watson (who once played with ABBA!) and myself had been involved in the band, Stockholm All Stars, a few years earlier. Actress Maria Lundqvist came straight from Povel Ramel shows. We also included Carola and Tito, with whom I had worked before.
It was a magical feeling that first night in Piteå in the north of Sweden. Our first time experiencing standing ovations. It felt like the perfect show all the way. The encore was a pastiche of B&B (Björn & Benny of ABBA) and the A-Teens. We called ourselves the B&W (Berglund & Wells) and the ABBA seniors! 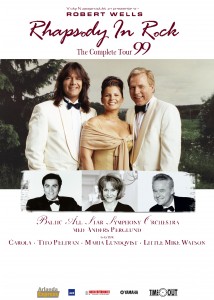